skip to main | skip to sidebar

Yankees guy has a new home

Were making a move

For a couple of months now the staff here at Yankees Guy has been developing a new blog. (Ok you cau.ght me I'm the staff) We are going to the dark side and switching to word press. Now I know many of you blogger.com faithful will call me a traitor and say that I sold out. In all seriousness this is going to be a strong power move for the blog. For the first month I will simultaneously post on both blogs to give everyone a chance to update their blogrolls, bookmarks, feedburners, ECT...

The new blog can be found at Yankeesmagazine.wordpress.com

It’s a power move more hits off search engines ect... Now I know what you are saying. "Mike you spent so much time building up Yankees Guy why change now" To be honest with you I like what word press has to offer and I think you will find the new blog to be just as good if not better. I appreciate all your support and your patience during this transition.

Ok fans of the evil empire what do the Yankees do next? Answer the poll to the right.

I. have recently discovered feed burner. If you don't use it you should. It lets you read multiple blogs very quickly. Check it out you won’t be disappointed. You can get my feed by clicking the link on the right. Allot of people are also choosing to subscribe to Yankees Guy by E-mail. Sometimes it feels like I’m talking to myself but according to stat tracker we are averaging 20-50 hits a day and many return visits. I want to thank you all for your support and the outpouring of E-mails I have received. Your input is always appreciated. If you have Ideas for stories leave me a comment or drop me an e-mail @ mdrook6206@hotmail.com. Myself and a couple of other bloggers are thinking about putting together a monthly e-magazine which articles will be written by all of you and posted once a month. Could be allot of fun still in the works but hoping to come out with first issue next month. Let me know what you think and thanks for reading.

Continuing with our series evaluating the AL East position by position the Rays house the newest of the outfielders in Pat Burrell. Without knowing exactly what the Rays are planning I am assuming that he is going to play Right field. I suppose he could play left but we have already looked at Carl Crawford so for comparison sake we will look at him now. Pat has hit 20 or more HR every year since 2001, 30 or more three out of the last four seasons. He doesn’t really hit for average, .257 lifetime (very Gambish) and strikes out allot. He is an average fielder but will add some right handed pop to the Rays offence. Kind of a poor mans answer to Tex. Grade B-
Xavier Nady joined the Yankees midseason last year and made an immediate impact filling in for the injured Matsui. He hit a combined .305 25HR 97 RBI between Pittsburg and NY last season. This is a little better than his career average .280 which is still very respectable. He is an above average fielder and is well liked by everyone he has played with. The Yankees avoided an arbitration hearing and agreed to a 6million dollar deal for 2009. Among much speculation that he may be traded He remains the Yankees best option in 2009. Grade A-
However their remains the possibility that Nady could be delta prior to the start of the season. If this happens the Yankees will go with newly acquired Nick Swisher. Swisher also hits for power but unlike Nady doesn’t hit for average holding a career average of only .244. He does however have a great arm, the ability to play all three outfield positions and first base and he is 4 years younger than Nady. Swisher is expected to have a bounce back year after only batting .219 in 2008. I look for Swish to back up Tex and be a fourth outfielder for at Yanks. But don't be surprised If Nady is dealt now or at the trade deadline. Grade B-
Jd Drew has been a prize for the Red Sox that most teams would love to have. If nothing else he is consistent. A ten year Vet with a great arm and a career .280 average has started 100 or more games every year since 1998. Drew has been awesome in the post season for the Red Sox batting .314 with a Homer and 11 RBI's in 14 games. Grade B+
That pretty much wraps up position players. Next we will compare the Starting rotations starting with the Aces on Tuesday.

Why do the Yankees set themselves up

The Yankees stood by Andy Petitte through thick and thin. They let him come back after he turned his back on them, they stood by him when he admitted to steroids, and finally they offered him 10 million dollars to come back in 2009 after posting a 14-14 record and an ERA over 4. Not to mention that he was horrible after the all star break. Then Pettite slaps them in the face saying he doesn’t want to take a cut in pay from the 16 million he made last season. Let’s put this in perspective here is what the Yankees starting rotation will make in 2009

Yet somehow Pettite believes that he is worth $16 million in 2009??? Now the Yankees are embarrassing themselves further upping their offer to $10.5 Million.

If he doesn't take it let the bum go! They can probably get Sheets and Garcia for not much more than that or let the kids fight it out for that spot. Time to focus on the Bench and the Bullpen let’s get the Rotation settled yesterday.

The Curious case of Benjamin Button.... I mean Kei Igawa 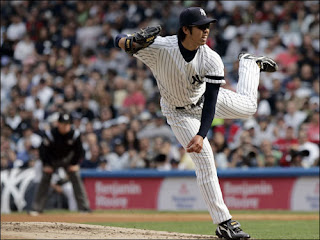 Kei Igawa’s has been considered a bust by most everyone in the Majors and rightfully so in his MLB career with the Yankees he has pitched 71 innings and given up 89 hits 15 of those going yard. But what is really disturbing is his ERA being 6.66 all biblical jokes about him being the Lefty antichrist aside why has he been so good in the minors and so bad in the majors. In AAA Scranton last year he pitched 156 innings only giving up 141 hits with 117 strikeouts and an ERA of 3.47. This again brings me to the case of why is he so horrible. Let’s break it down, the good: He has a good speed ratio between his fastball and changeup. 92mph FB and 76 Mph Change. That’s a good if not great difference. He pitches to both sides of the plate and isn’t afraid to come in on Lefties. Ok now the bad: He pitches up in the strike zone, he has poor arm speed, and he relies too much on a below average curveball and he over strides causing his hips to open prematurely. Frankie Piliare of Saber Scouting describes this better than I ever could by saying "Take note of how Igawa’s leg swings open as oppose to just a normal stride forward. This also causes his hips to prematurely open. By doing this, he is causing his front foot to turn open also. Notice that his foot lands very hard on his heel and not on the ball of his foot. Because he is landing on his heel, as he begins to drive with his legs, his heel will rotate slightly before the rest of his foot comes down. It’s a small millisecond but that is more time for his front side to premature open up. Especially since he is a leg drive oriented pitcher this is especially true, but a pitcher’s upper body and arm follow and are dictated by the actions of the lower body".
In Lamons terms he needs to start listening to the Yankees pitching experts most of his problems can be corrected. He’s still a young guy at 29 and he’s a Lefty. He may never be part of the regular Yankees rotation but it’s my belief that he could be an effective lefty out of the Pen if he can overcome some of these issues. Allot of it could be mental as well in April of 2007 he came out of the pen against the Red Sox and pitched 6 inning only giving up 2 hits no runs and had six strikeouts. He didn't have time to psych himself out and he pitched well. Don't give up Yankee fans there may yet be hope for our former Japanese superstar, or perhaps we should just take the 46 million dollars we spent on him as an expensive lesson.

Here it is the long awaited Center Field comparison. Let’s start with the easy ones. The Rays feature B.J. Upton as their deep man. He has showed great speed and decent power. 2007 was his best year when he batted .300 with 24 HR. Last year was down from that but he had more hits overall and 44 stolen bases. He had 16 assists against only 7 errors. One thing to note is that he can also play the infield and in 2007 split his time between second, short and center. Overall a young talented player that can play muti positions. Grade B+

The Red Sox Jacoby Ellsbury is a Gem of a Center Fielder. At only 25 years old he is a five tool player. Although he hasn’t shown allot of HR power I believe it’s there. He has a plus arm and is super fast with 50 stolen bags in 2008 and boy can he cover ground. In his short 2 year career he has yet to make an Error. He batted .280 in 2008 and you can tell if he stays healthy he will have more years over .300 than under. Grade A

With the Yankees it gets more confusing. Last year the position was shared between Melky Cabrera and Brett Gardner. Melky started the season for the Yanks and after a poor showing was optioned back to AAA in August in favor of Brett Gardner. Gardner added a dimension that Melky did not provide. Speed, and allot of it. He didn't hit well but showed some signs of life in September after some adjustments to his swing were made by hitting Guru Kevin Long. It has been stated that the barring a trade made prior to spring training the two of them will compete for the Job. If Gardner can continue to hit like he did in September he definitely has more value. Both Cabrera and Gardner are thought to be stop gaps for Austin Jackson who is by far the organizations best Athlete. He like Gardner is very fast and has the potential to be a power hitter and great defender in the future. Unless something unusual happens in spring training he is probably a year away from the majors. Based on what the Yankees have now they get a B
The Center field edge goes to Boston but it could be different my mid season

What move will the Yankees do next

Tunes to watch the Yankees to